The Vessel at Hudson Yards

The extraordinary centerpiece of Hudson Yards is its spiral staircase, created by Thomas Heatherwick and Heatherwick Studio, Vessel presents a uniquely interactive experience – a monument meant to be climbed and explored. Comprised of 154 intricately interconnected flights of stairs – almost 2,500 individual steps and 80 landings – the centerpiece will literally lift up the public, offering a multitude of ways to engage with New York and each other.

You’ll take the vertical climb and experience remarkable views of the city, the river and beyond from different heights, angles and vantage points.

For groups below 15 guests:

With unsurpassed connections to commuter rail service, the subway system, the West Side Highway, the Lincoln Tunnel, and ferries along the Hudson River, Hudson Yards is at the center of the metropolitan region. Hudson Yards is located between 10th and 12th Avenues from West 30th to West 34th Streets. 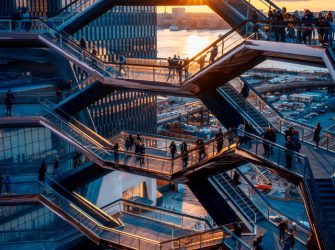